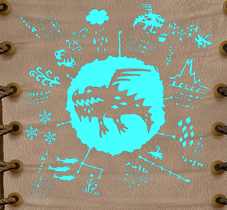 Groncicle in the Dragon Eye

The Groncicle is able to freeze water around it while swimming. This is probably because the ice in its vein causes the water around it to lose heat and freeze, though the reason for the Groncicle's uncanny behavior is unknown. One possible purpose is to freeze and trap their aquatic prey in water.

Groncicles eat snow to generate their ice breath. They will also use soft snow and this cold breath to build their nests. They are seen to live in social settings with one another. Groncicles are a peaceful, friendly, non-aggressive species. Having been the first dragons to ever be peaceful with humans (with the ancient Vikings of Icestorm Island), they are naturally kind with people. Despite their cold natures, Groncicles are big softies. They are a helpful race that allies to those who treat them with respect. But they do not respond kindly to a lack of respect and should not be taken lightly. Their affinity to ice and snow means they must remain in cold environments or they will overheat. Summer in Berk, for example, is too warm for them.

Interestingly, it is revealed in School of Dragons that Groncicles like smoothies made of a mixture of arctic gentian, arctic poppy, and pumpkins. It's indicated that no other dragon, or human, enjoys this strange drink.

Groncicles that have reached the titan wing stage change quite a lot. Their body is darker and there are light blue outlines of what seems to be their liquid nitrogen veins. Their wings have white rings and its edges develop small, spiky icicle-like structures. Titan Groncicles' mouths glow purple and their eyes turn pinkish purple. Also, the icy spikes on their tails and under their chins become larger and thicker..

This dragon first appeared in Rise of Berk, along with its Titan Wing form, where the Frozen Groncicle was introduced.

This dragon also made its way to School of Dragons and was made available during the Icestorm Island expansion pack.